Life on the dark side of digital.

By Nadine Zrinzo
Whether we like it or not, the dark side of digital has always existed and Brisbane is no stranger to life in the shadows. After all we are home to the internet Porn King, Greg Shiraz Lasrado (and his posse), who were amongst the first in the world to make money from online porn in the 90s.
.
Although we always knew that the darkness existed, it was an easily ignored piece of the digital landscape. However, the past 18 months have marked a big shift in our ecosystem. No longer able to ignore the shadows, we started seeing the negative repercussions of having almost every facet of our lives online, and the reality that bad actors are lapping that up. Trust in corporations & government has become fragile making responsibility critical for our future.
.
Back in 2006 no-one thought twice about signing up for Facebook – we were simply excited at the prospect of moving away from ICQ and MSN Messenger. Data breaches, spyware, Russian trolls and the other 21 or so Facebook scandals were beyond our (arguably naive) horizon.
.
But Facebook and its endless stream of faux pas are just the tip of the iceberg. Particularly when words like: Killer robots, data weaponisation, platform manipulation, surveillance economy, deepfakes and algorithmic bias – have somehow, all become part of our vernacular.
.
The internet could indeed be broken. Not the technology itself (unless Russia decides to press the off button) but in terms of how we are engage with our digital realities and the conveniences granted to us by the ever evolving technology.
.
Which brings us to the importance of having confronting and uncomfortable conversations about the dark side of digital. Because if we, the creators, the developers, the leaders and the early adopters are not paying attention to the unintended consequences of the technologies that we are building, then no one else will.
.
So what does responsibility in the fourth industrial revolution actually mean? In most jobs, we understand that we have a responsibility to create safe, honest, fit for purpose services or products. “Do no harm” and avoid anything illegal, is a simple yet sound baseline (for most of us).
.
Yet when it comes to digital innovation and technology, the ethical lines start to blur. There is a wide grey area between right and wrong. Not because we don’t care, but because we don’t know. After all diving into any unchartered territory involves many unknowns and we have learned to accept that is the price of digital evolution.
.
We understand  what algorithmic bias is and know that we should work to eliminate it, however the practicalities of that are complex and resource heavy. Is it simply easier to run a slightly biased system? Should we?
.
We want robots to exist and make our lives easier, yet what happens when they start lusting after paper clips? Or when they replace our need for human intimacy? Should there be set rules on what they can and can’t do?
.
We realise that we have a responsibility to protect the data we collect from our customers, to only use it for its intended purposes, but what happens when there is a request from above misappropriate said data? No one will know, so no harm done!
.
What happens when the Federal government approaches employees asking them to spy on their company under Australia’s new encryption law? Should they risk going to jail to protect your privacy?
.
What if the stakes are higher and technology built for good, is used to build autonomous weapons? Or as a prank, a silly teenager spray paints a stop sign which in turn causes a self driving car to run over a pedestrian? What happens when hackers aren’t coders any more, but ordinary people?
.
Bill Moyers said that ‘our very lives depend on the ethics of strangers and most of us are always strangers to other people’.
.
Bill was probably referring to politicians, academics or priests – our old school moral compasses (for better or for worse). Today our lives depend on the ethics of people like Mark Zuckerberg, Larry Page, Jeff Bezos, Elon Musk, Donald Trump…
.
… but our ethics come into play too. Yours and mine.
.
We might not have control over Google or Facebook, but we have a responsibility to understand the unintended consequences of our digital lives – if nothing else, to make the right decisions for ourselves, our families and our communities.
.
The darker side of digital might be stronger now than it was in the 90s when Brisbane had a porn king, however, so is our ability to build more trust, foster responsibility and leverage technology for the good of society. We just need to rise above the dark side of digital!
.
– – – – – – – – – – – – – – – – – – – – – – – – – – – –
.
Join us this March for our Night Nomads series as we tackle the darker side of digital through three frank and confronting conversations around the way in which digital technology is interfering with our lives. From data weaponisation to intimacy and our new robot servants, we will be asking the tough questions and looking for answers in all the dark places.
.
www.somethingdigital.com.au/night-nomads
Digital, Events, Night Nomads

Nadine is Something Digital's Chief Content Curator. With over fifteen years of experience creating and curating events across Australia, Asia, Europe and the US, Nadine is responsible for ensuring all our events have an outstanding program presented by exceptional speakers.

Previous The Night Nomads are coming.
Next Talking data, trust and security with Davey Gibian 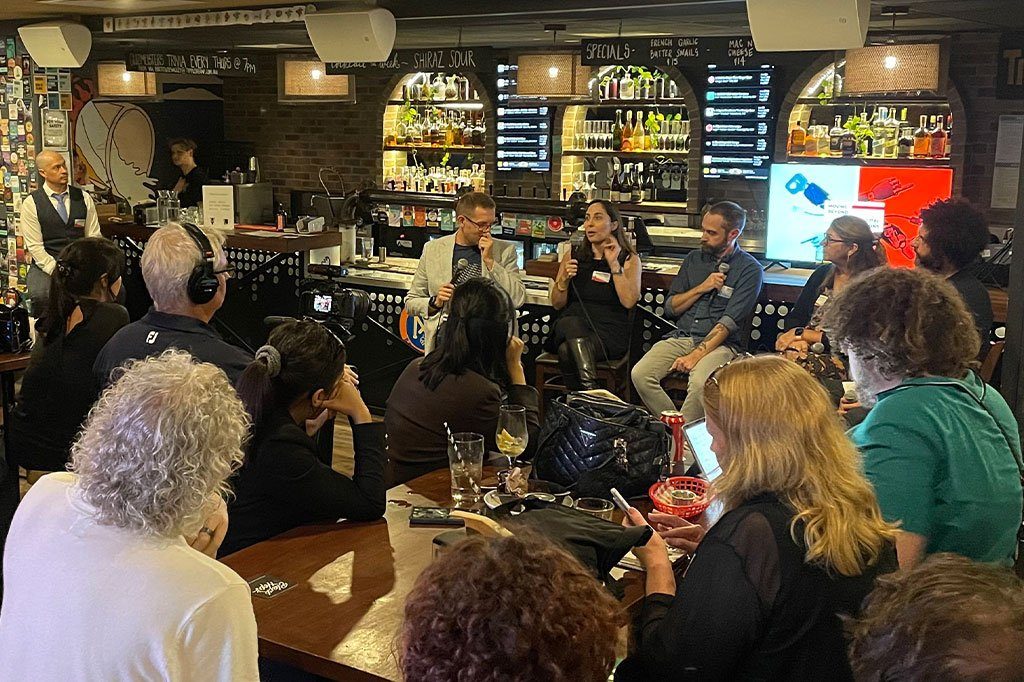 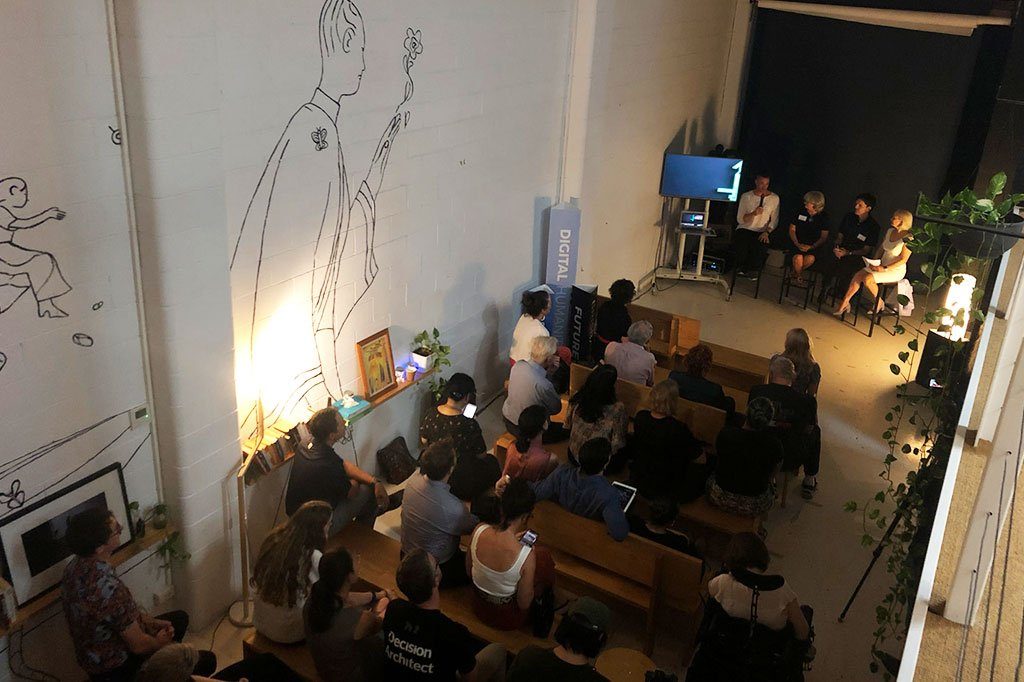 Nomad 2 2020: The wrap report. The disintegration of the digital/physical divide. 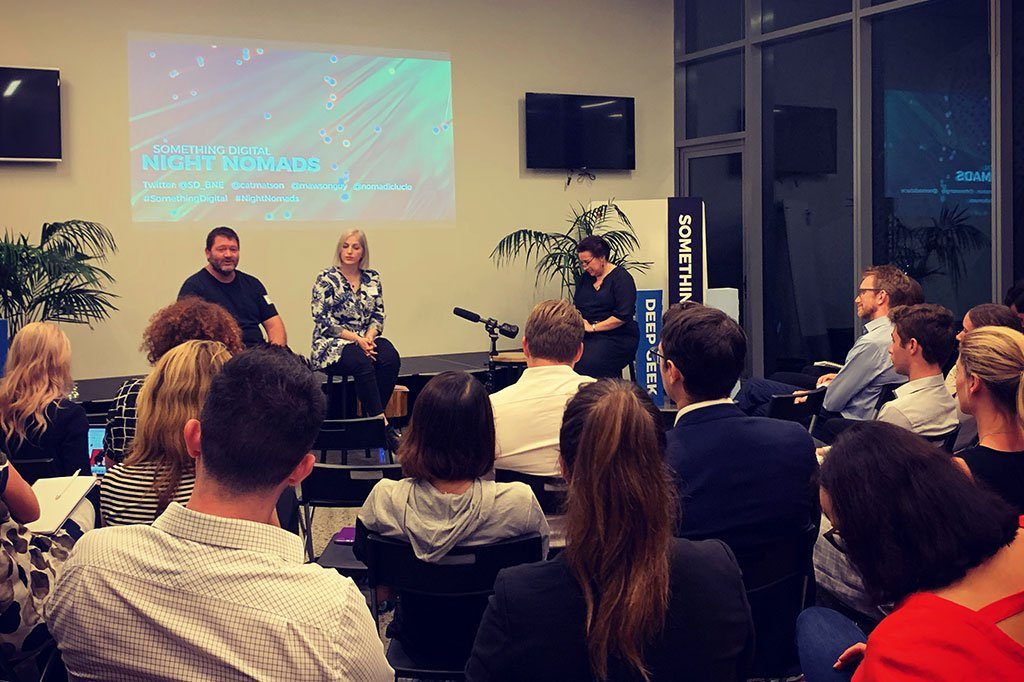